Finishing Touches to Make Your Bathroom Stand Out

I’ve recently remodelled the bathroom in my home and what really surprised me about the process was how much time it took me to decide on the little things, in comparison to choosing the main suite.

While I was looking at the vast array of products on the market, I realised just how important finishing touches can be and that getting these right will make a nice bathroom into a truly great one.

So, here are a few of the accessories that I think you need to pay attention to in a bathroom if you want it to really stand out.

Bathroom taps need to be practical and it can be easy to overlook this functional part of your space. After all, you can often buy sinks and baths with taps already attached, which may mean you don’t even consider changing them.

I think that’s a mistake, though, as replacing uninspiring taps with something a little more special can make a big difference to how your bathroom looks. It doesn’t matter whether you’re going for period decor, or something really contemporary, as there are taps on the market to suit all manner of design schemes.

Firstly, you should decide whether you would prefer to have two separate faucets, or one mixer tap. The latter is often the best option if you’ve got a shower over your bath, as it makes controlling the temperature of the shower much simpler than if you have two taps.

Next, you need to look at the designs of the available bathroom taps. Chrome is the preferred material for these fittings, as it’s durable and won’t rust, with most taps coming in this finish.

In a contemporary bathroom you can go one of two ways – either opt for taps with sleek curves or choose ones that are more angular and blocky. For bathrooms in a period design, however, I think cross-head taps are the best option as they evoke the style of the Victorian era.

This is certainly something that I put a lot of thought into, as I love my showers and wanted a shower head that would be powerful and look great. Again, there are numerous varieties on the market in a range of designs, so you should be able to find one that fits in with your decorating scheme.
Shower heads with adjustable settings are a great idea in a busy household, as everyone can alter the shower to suit their preferences. For example, some shower heads can be set to project water in one jet, to provide a gentle flow from several small openings or even to resemble rainfall.

Towel Rails and Other Finishing Touches

In my opinion, towel rails are an essential item in any bathroom, as they are convenient and mean you have somewhere to dry wet towels once you’re finished in the bathroom. As these tend to come in chrome, they will match your taps really well and if you are planning to install things like a towel ring by the basin or a toilet roll holder, it pays to get them all in the same finish to ensure continuity.

You can even carry this theme through by purchasing a matching soap dispenser or basket to store some of the usual bathroom clutter. I’ve even opted for a chrome-framed mirror to help tie everything together.

What other finishing touches would you suggest homeowners look out for when they’re redecorating the bathroom?

How to Make Your Bathroom Sparkle

Is Hard Water That Bad?

Is it Time to Update Your Showerhead? 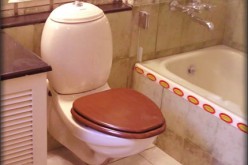 How to Replace Your Toilet

Home Improvement Tip for a Sunday 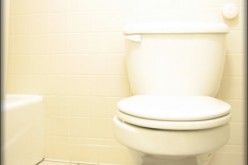 How to Fix Your Clogged Toilet

How to Make Your Bedroom Look Like a Hotel Suite